The Wakeman of Ripon

NOW, PLEASE READ ON ABOUT RIPON AND BE AMAZED - ACCORDING TO LEGEND PASSED DOWN THROUGH THE AGES -

'Setting the Watch' dates back to the year 886 when Alfred the Great visited the City in those unsettled and troubled Viking times, and was so impressed by the place itself and the support he was given by the people against the intruders that he decided to grant the community a Royal Charter. As it was a spontaneous decision he did not have a parchment scroll or anything of that prepared. All he had to offer them as a symbol of the Charter was a horn. He told them that they should treasure the h

orn, refer to it henceforth as THE CHARTER HORN, and look after it for ever, and the people did. It is still in safe keeping in the City Town Hall today. (A PICTURE OF THE ACTUAL CHARTER HORN GIVEN BY ALFRED THE GREAT AS IT IS TODAY CAN BE SEEN IN MY PHOTO GALLERY)

It was at that time he told the people of Ripon that they should be vigilant as the Vikings were still a threat and other unruly elements in the land could descend upon them and they risked losing all they held dear. He suggested that they appoint a 'Wakeman'. The 'Wakeman' would be a man who stayed awake and patrolled the area all through the hours of darkness keeping a watchful eye while others sleep safely in their beds. So they appointed a 'Wakeman', and they further decided the he could put the Horn to good

use. He would sound the Horn at the four corners of the market cross at 9pm each evening to let the people know that the 'Watch' was 'Set' and they could retreat to their homes knowing full well that it was safe for sleeping, and that he was out there keping a w

atchful eye all night. It has not been missed, not even for one single night since then.

The ritual continued almost unchanged throughout the centuries to the year 1604 when a second Charter was granted to the City by James 1st, (who was James1st of England and James 6th of Scotland and the first king to rule over a united Britain). This time it was a written Charter. It was decided at that time that things should become more democratic in Ripon because the Wakeman of the day had become all too powerful. He was elected by and from a group of about 15 of the most powerful men in the City, no one else had a say in the matter, and once elected to the office of Wakeman for a one year term of office, he simply appointed the others as his constables. Between them they ruled the City with a rod of iron, made up laws to suit themselves, and meted out justice as they saw fit including lashings on the square where the ancient ceremony now takes place. However at the granting of the second Charter, the office of Wakeman was discontinued, and he was replaced by the first Mayor to be elected by vote by all the people, and the Mayor appointed a Hornblower to carry on the ceremony of 'Setting the Watch' on his behalf.

e Wakeman House', and is now used as a cafe.  However Mr. Riply did not trust his Hornblower and put a rule in place so that he could keep his eye on him and to make sure he has done his duty each evening. That rule requires that, when the Hornblower has 'Set the Watch' at the market cross at 9pm, he must find the Mayor of the day, wherever he is in the City and report to him that he has done his duty by standing in front of him and after sounding the Horn three times, he must bow his head, raise his hat and shout the words "Mr. Mayor, the Watch is Set".  That is still done today, and must be done wherever the Mayor is, whether it be at home, at a function, or in the Town Hall. If the Mayor is outside the City or away on holiday it had to be done on the Town Hall steps as if he was in residence.

It is said that if the Horn is not sounded to his satisfaction, the ghostly face of Hugh Ripley will appear in the attic window of the Wakemans House and a pest

ilence and other great tragedies will descend upon the City

The  nightly Ceremony attract visitors from all over the world as well as from every part of the U.K. At the height of summer there could be up to a hundred people there each evening, and in the depth of winter there are always some people looking on.

The city has four Ceremonial Horns. The original Charter Horn given by Alfred the Great in 886 does still exist. It is not blown any more and is in safe keeping in the Town Hall. It is now covered in black velvet and capped with solid silver and hangs on a wide leather Baldric which bears the badges and crests of previous Mayors and Wakemen.

The Charter Horn was replaced by the 1690 horn which is the only Horn the city ever paid for. They were charged six shillings and eight pence at the time, which is equal to a mere thirty four pence in today's money. It is recorded that it was considered a princely sum, and those who charged that price were referred to as no less than thieves, rogues and vagabonds by the Council members of the day. That Horn can still be used today f

that purpose, and is a wonderful specimen of craftsmanship from that era.

The next Horn to be introduced was a very large African Ox Horn given in 1886 to celebrate 1000 years of granting of the first Charter. This is always in the possession of the first Deputy Hornblower who has to be fully equipped and prepared at all times to stand in at short notice should the Hornblower of the day himself be unable to carry out the duty of 'Setting the Watch'.

Horn number four, is the one used by George Pickles the Hornblower from 2004 to 2015. This was given to the City in 1986 to celebrate 1100 years of granting of the first Charter. It is a large Ox type animal Horn with copper fittings and was created by a local craftsman and financed and donated to the City by a local company called Si

gma Antiques. This is considered by most as the most beautiful of all the Horns.

There is a fifth Horn in the City but it has never been blown. It st

ands 93 feet (30Mtrs) up on top of the Obelisk as a symbol of the City. It is a weather vane and also a sealed time capsule. It was sealed the time before last in 1889 for one hundred years, and it was always said it contained 7 gold sovereigns. It was taken down in 1986, three years before the hundred years was up because urgent repair work was needed to the upper part of the Obelisk. When it was opened up the sovereigns were gone and there was just the bill for the last time repairs were carried out.This, to put it mildly, did cause some disappointment !!. It was re-sealed in 1986 for a further 100 years and this time there is money inside the sealed Horn. Maundy money given to the City by the Queen is now in the

Horn together with a bill for the repairs this time. The bill for repairs in 1889 was 42 pounds and the bill for almost identical repairs in 1986 was 13 thousand pounds. That gives some indication how things have changed over the years.

For  more information, please go to -

or - TO LEARN MORE ABOUT THE HORNBLOWER LUCKY WOODEN PENNY _

Now watch George the in his own inimitable way

THE HORNBLOWER PLAQUE ON THE OBELISK - Permanently removed

The Ancient ceremony of Setting the Watch started in 886 and has been carried out every evening since then without a miss by dedicated Hornblowers.

This Plaque displays the names of those Hornblowers who have kept the evening ceremony of Setting The Watch alive over the past 200 years though wartime and peacetime, regardless of weather and conditions. The plaque was financed and donated to the City by Mr Joel Bastow from the USA who was stationed at the nearby Menwith Hill base and served as Deputy Hornblower in the late 70's and early 80's. The plaque was his gift to the City when he was posted back to the USA.

This plaque was removed during November 2019 by the council on the grounds that it was too costly to update and was damaging the Obelisk.

Although some interested kind and decent people have offered to finance the updating, and on inspection there is no evidence that the plaque or the updating has damage the Obelisk in the past or will in the future, the council is adamant that the plaque will not be replaced.

Surely the Councils decision is an insult not only to Joel Bastow and those dedicated people named on the plaque but to their families and descendants as well.

There must be a story here that some reporter will pick up on one day. 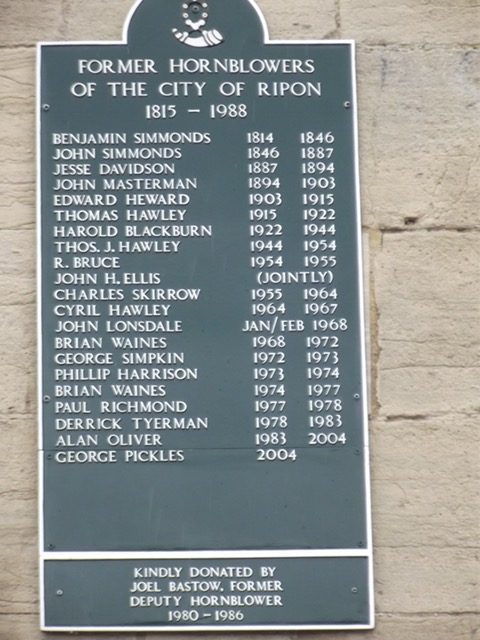